From 21th to 30th September,2016, youth from six European countries gathered to discuss cultural tolerance issues in Varna city, Bulgaria. Participants from Italy, Romania, Turkey, Lithuania, Macedonia and Bulgaria became a family for a week united by one goal: to explore Cultural Tolerance in Multicultural Europe by the power of non-formal education.

Project participant Yiğit (Turkey): “What I liked the most about this project is the people. There were so many different people from different countries but most of them were so open minded and friendly. Everybody became friends during the project. These projects are important because it helps everybody to know other cultures and their lives. It makes a bond between countries and people”. 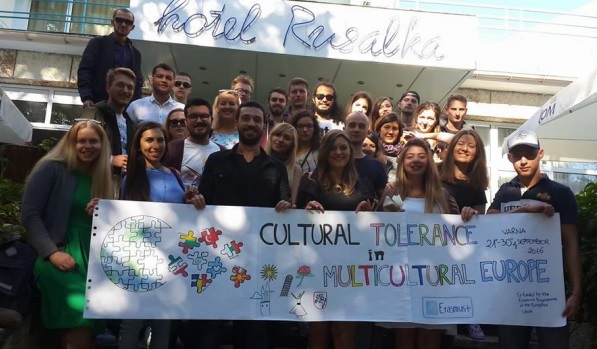 Erasmus youth exchange project “Cultural Tolerance in Multicultural Europe” was organised with the aim to promote the cultural diversity in order to increase tolerance, empathy, acceptance, and to fight with discrimination, racism and separation. Valuable discussions covered the topics of discrimination, xenophobia and racism, islamophobia and antisemitism or what is like to be a refugee.

To make the topic more flexible for the young people, project participants experienced the issue while joining different activities such as simulation game “Diversity country” or “Mission dangerous”. International youth also had a chance to experience the point of view of Varna citizens and discuss cultural tolerance issues while doing interviews with locals in the city.

To make the project and the topic more visible, the participants performed theater performance “Come whoever you are” in the heart of the city of Varna, next to main entrance of the Sea garden. Project participants shared their ideas with the locals not only while performing, but also giving their best wishes to the citizens with small buds of paper flowers.

Project participant Bekim (Macedonia): “Participants were very friendly and open-minded and they made this project one of the best I have ever been to. That kind of projects are important for me because you get to know a lot of new people with other culture, mentality, religion and you still end up to build a strong relationship with them despite the differences”, says Bekim.

While having different kind of activities, project participants tried to cover all the issues of “Cultural Tolerance in Multicultural Europe” topic. The main objectives of the project were:

Project participant Edita (Lithuania): “It was a chance to learn from each other how multicultural countries can be. We’ve represented our countries, discussed similarities and differences. I was amazed to learn about Albanian people in Macedonia and about multicultural Turkey.”

The project would not be possible without the financial support from European Commission.

The accommodation, traveling cost, meals and activities for the project participants were free of charge supported by the host organization through the Erasmus+ grant from European Commission.

If you want to know more about the Erasmus+ project, visit this link.