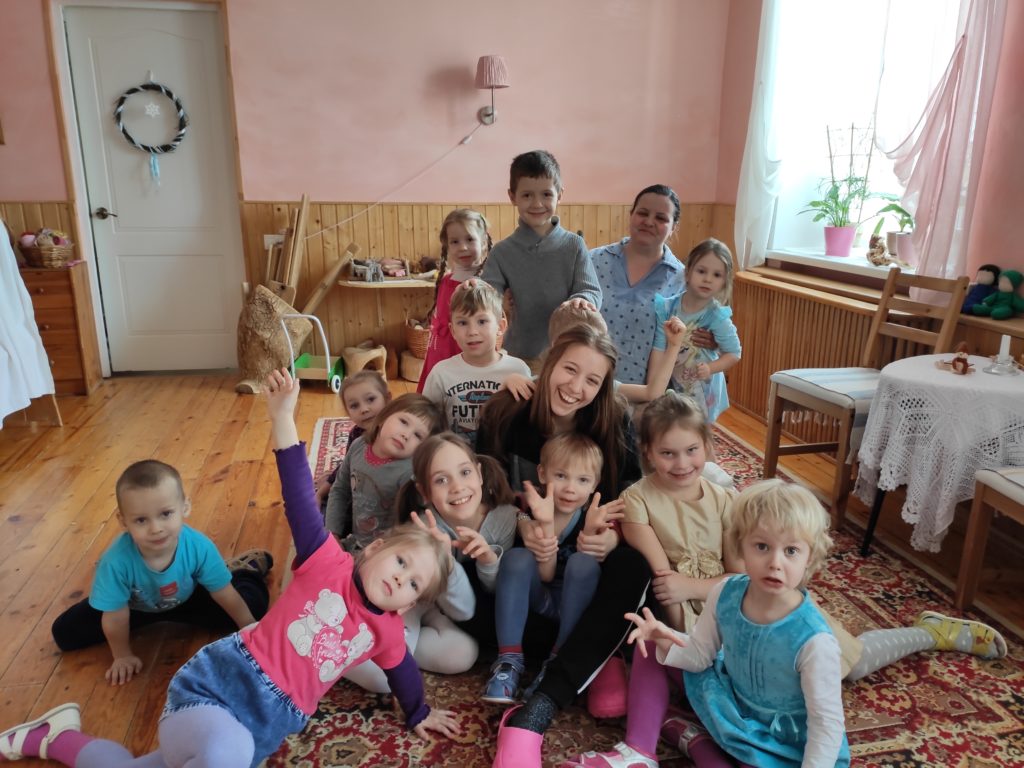 A fac totum spider and a train full of landscapes

I’ve always thought that people going on a volunteering project are a new version of Mother Teresa of Calcutta, putting their time and energy at the disposal of other people in other countries. Then I decided that I wanted to go back to Russia again, in a different ways this time, not as an exchange student, so I started looking for associations and projects for young people.

I found the association Lastochki, working in a big city in the middle of Russia and I understood that that’s was I was looking for.

I wanted to discover the real soul of Russia, its traditions and habits and to improve my language knowledges: working in a Kindergarden could have been a perfect way to start. Moreover I asked to live in a host family, a decision that has is pros and cons but still I think it’s worthy if you want to  live the real Russian life.

In a few weeks everything was already decided and I was ready to leave for the big Russia.

Three days after my arrival I was sent with other 3 volunteers of Lastochki on the On Arrival Training, a very useful meeting with all the volunteers in Russia, where we could discuss our aims, our expectations, our feelings, fears and problems in order to work on them together. 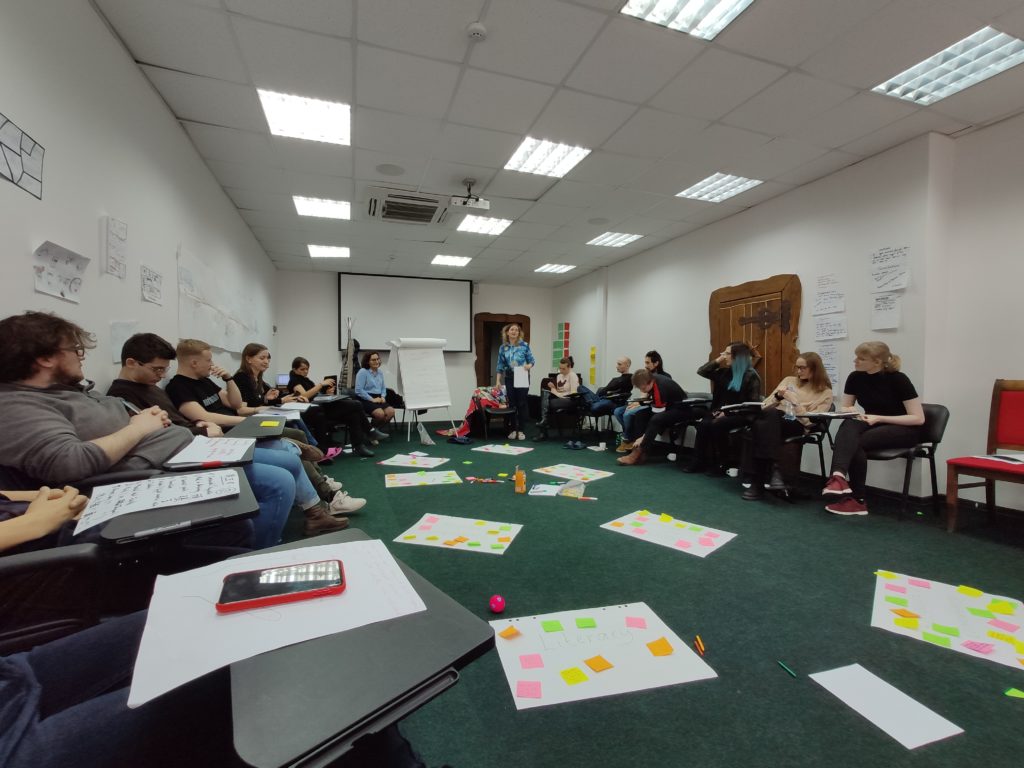 There I found two pictures that perfectly represent what is the ESC for me:

1) a spider sailing on a nutshell, trying to fulfil all the tasks needed, trying to survive and making everything go well.
2) a train travelling on a coloured landscape where each coach is represented a different landscape (mountain, lake, sunny day, cloudy day). 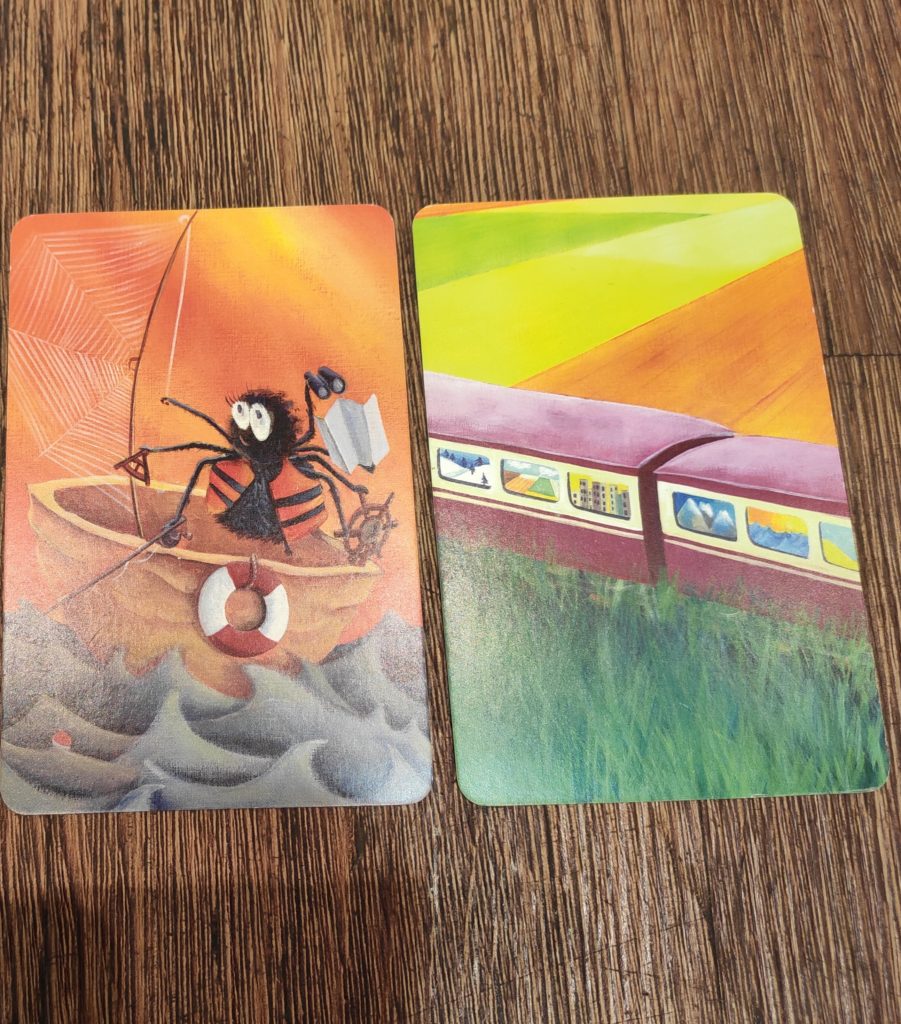 On the one hand the spider is me, trying to combine all the tasks I have both in my kindergarden (paying attention to the youngest children, playing with them, help them eating and get dressed, clean the floor and cutlery) and in general in the project life (organising international evenings with games and workshops, going to Russian classes, live with the family and take part to all the activities they propose to me, handle with the new challenging realities of the Russian culture).

On the other hand the train sums up the ESC experience in general: a period of time in a foreign country includes different moments, happy and sad, difficult and easy, lonely or full of people, satisfying or frustrating but you have to be ready to face all of them, keeping in mind that every feeling and situation is part of the “journey” and that is right to live it with all your energy and that you can always learn something from every situation, make them useful in order to repeat or avoid them in the future.

Working at a Kindergarden

After this 4-days training I started my project in the first Kindergarden, where I was a border- figure. The waldorf kindergardens have a strict plan of the day and the week, this means that after one week you already know what is approximately going on there. They have 5 different workshops, one for each day of the week (painting, taking care of the plants, preparing biscuits, working with wood etc) for the first part of the morning. Afterwards they gather together in a circle, sing songs, play games until the breakfast is ready. It’s interesting to learn all the rules they have, but it’s easier if you ask how you have to behave in order not to make any mistakes and being (kindly) yelled by the teacher. After breakfast there is one hour free time for playing inside (when you can play with every child, read books with them, build houses and any other thing that your creativity is able to invent) and then one hour on the playground in front of the Kindergarden, even if it’s cold or the ground is frozen, because they are really good equipped. I was asked to clean with the vacuum cleaner some areas of the kindergarden while the children were playing outside and then as soon as I finished I used to join them outside. It’s a lot of fun outside because you can play different games, team games too, and it’s much more active than inside.
After the walk it’s time for a fairytale and once is finished lunch is usually ready.
After lunch the children go directly to bed so I used to help cleaning the tables and sweep the floor and then I went home.
Working there every day until 2 pm is interesting and challenging: the amount of children brings you to make several things at the time like control what they do and whether they argue with each other, pay attention to all of them because everyone wants to tell you about something happened with the grandma, with the cat, on the bus or on the toilet. Speaking and spending time with the children is so freeing, firstly because they have another vision of the world and can surprise you every time and secondly because even if you speak with mistakes they don’t care and answer you as if you said the most grammatically correct sentence, so you don’t really need to worry about you knowledges and can just speak freely.

Moreover it’s very practical changing tasks so often because you don’t get bored of them and for example cleaning the floor alone and in silence can be really helpful and energizing and after 3 hours of playing with screaming children.

Of course there are also difficulties in these kinds of project: sometimes, especially at the beginning, it’s difficult to understand the language spoken by the kids and the teacher, as if they had their own secret and magical language. Some songs are hard to learn too, also because the topics can be very disparate but the easiest thing to do is to ask the teacher if they have the lyrics, or if they can explain you the meaning so that you can understand better what’s going on and try to remember it better and faster. One thing that I regret is that I didn’t insist too much to take part actively to the organisation of workshops, festivals and being generally more involved in the day activities, so I just did what they told me to do but I never really helped with the organisation. Probably it was lack of communication or interest from both sides. This happened during the first days too, because nobody explained me what I had to do, which was quite confusing at the beginning, but then I understood what I could or couldn’t do and decided what I wanted to do. 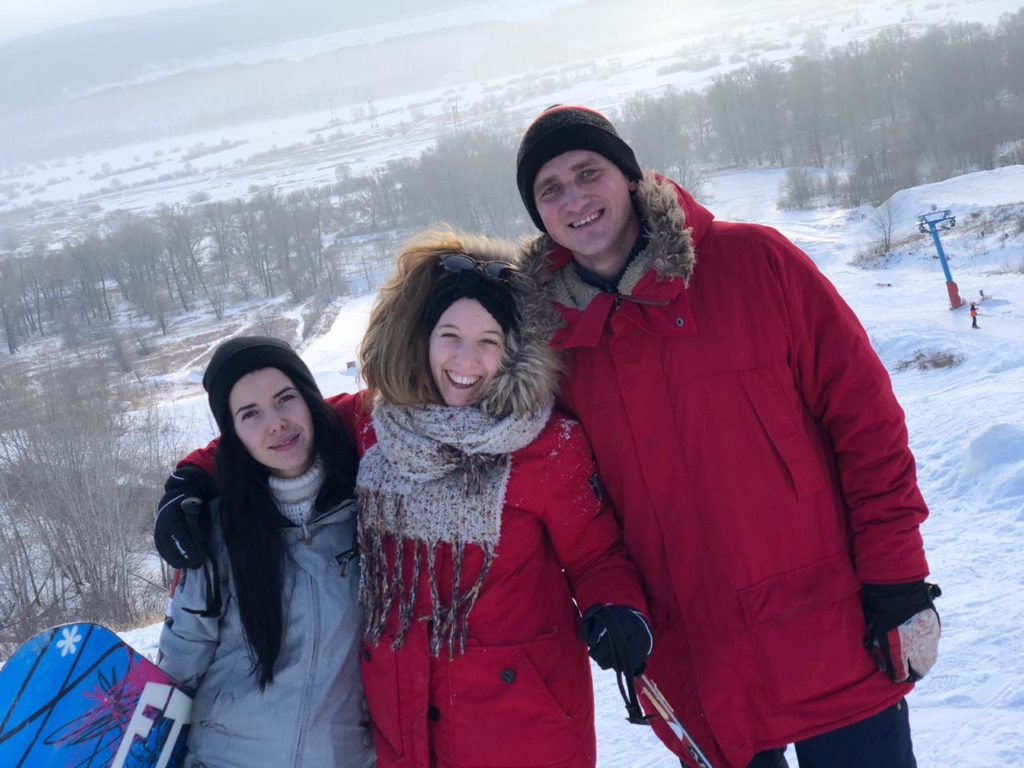 After three months, as agreed, I changed my Kindergarden. It was really sad to leave the first one, because I had already found my space, my role and my position during the day and with the children. I knew that it would have been different because of the smaller environment, the number of children and their way of development of the Waldorf system. As soon as I got there I immediately felt home because the teacher were very kind to me, explained me what were my tasks and how was the day organized. To that Kindegarden go only 6/7 children but they are more active and a little bit older than the children of the first Kindergarden so I didn’t get bored as I was afraid. It was a different experience because I was more involved in the games or activities and I had a little more time to have a conversation with the people working there. At the same time as it was smaller you don’t have that much space to move or to change “setting” during the day so sometimes  it feels you are 7 hours stuck in the same place but it’s okay. 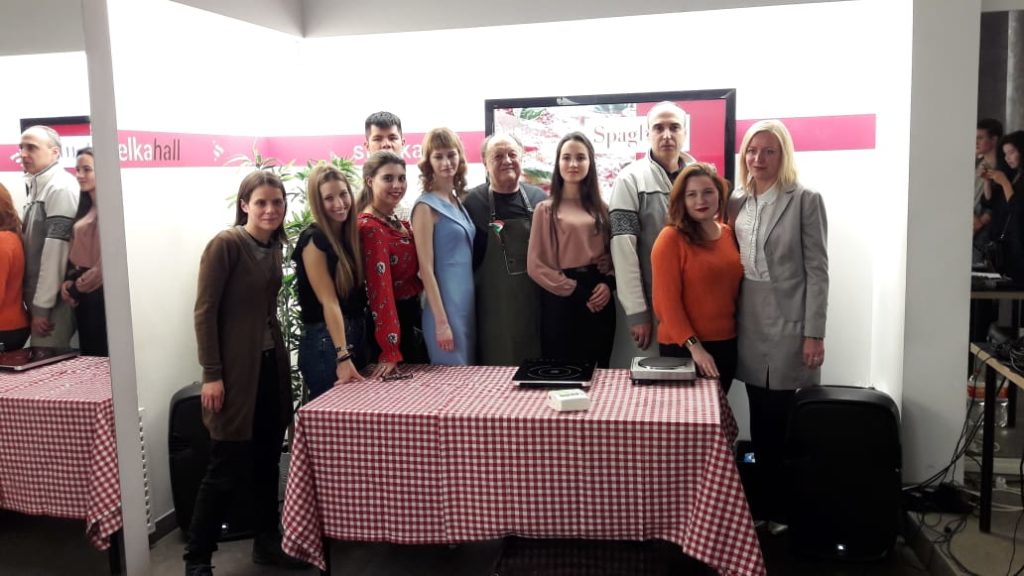 What I also loved about my project in Samara were the activities we organized in the Lastochki office or cooperating with other local associations. In the office took place many international nights (depending on the nationality of the volunteers), cooking workshops, Christmas party, S. Valentine party etc. This means that we offered activities, games, meetings with discussion on different topics and these were perfect opportunities to meet new people, speak foreign languages, present our own culture, reflect on it and reflect on what would have been the best way to share it with people from other cultures, learn interesting and fun facts about other countries and create a pleasant and enjoyable atmosphere. The best thing is that every volunteer, even if we have different characters and not everyone is keen on speaking in front of other people or prepare activities but each of us tried to do its best and the result was, in my opinion, every time different but perfect.

Cooperating with other associations of Samara was a new challenge for me too and the same time was very interesting. It was a chance to learn about important topics (like environment protection) and share our knowledges with other people and again to spread infos about our culture. It was really stimulating and satisfying planning an event, working with other volunteers, coming to agreements, facing unforeseen events and speaking in front of many people. 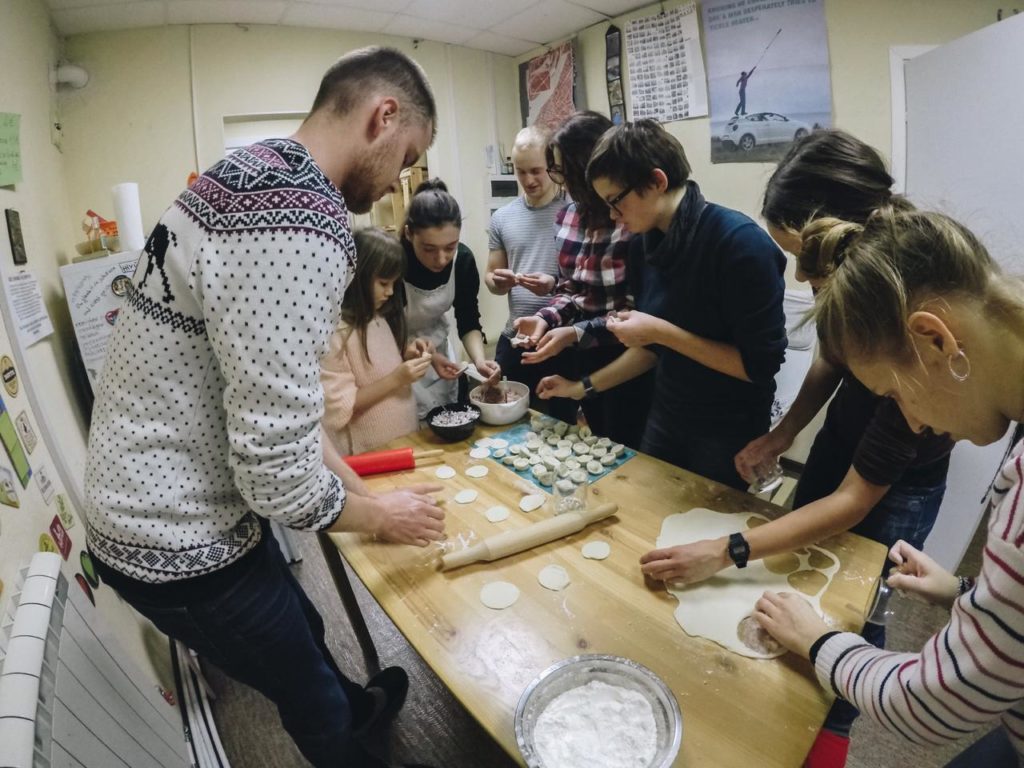 How nice is it, to be surprised? And when your expectations are exceeded?

Maybe because everything was decided in such little time I didn’t realize exactly was I was going to do, or maybe simply I underrated the program and was excited just by the idea of living abroad, in a host family and working with children and focused on that but already during the first weeks I understood that ESC was much more.

The coordinators asking about the trip, keeping contact with you, the host family, the mentor that helps you solving the main problems after the arrival and gives you support (a slice of Dodo “pizza” can be very useful sometimes) and the trainers of the meetings with all the other volunteers in Russia. It’s a big family, everyone knows each other, help each other and try their best to make you feel comfortable, at ease and to develop yourself.  I was positively impressed.
Moreover self development, under so many points of view, is something that I didn’t take into account and I only thought  about it at the “On Arrival Training”. When trainers asked us which were our aims for the project abroad most of us thought about learning Russian language, culture, cuisine and habits but then they showed us that this is only the tip of the iceberg. There are so many soft skills that you can develop and acquire by living abroad and facing so many new situations that, in the end, it seems that the time is too little to achieve them all. But the time is there, it’s yours and you only have to use it in the best way. This is the world that the Youthpass document and trainers opens to you, with the aim to make you taking advantage as much as possible from your project, reflecting about the non-formal learning process and becoming a active citizen. Amazing, isn’t it?

That is what I lived in the far and unknown Samara, which was the perfect frame for this incredible experience. I’ll be back soon.