A few days ago I came back from the Erasmus Plus program organized in Riterio Krantas, Lithuania, a few miles from Trakai, not so far from the capital, Vilnius. This project, called Kick-Off for Social Inclusion, involved a total of forty young adults from six nations (Italy, Spain, Poland, Macedonia, Estonia and Lithuania).

Its main focuses were sports and social inclusion/exclusion. Major European problems, such us alienation and isolation, were at the heart of the debate.

While talking with a project “facilitator” (facilitators are those who conduct the Eramsus Plus activities – editor’s note) we identified that the major Erasmus Plus’ limit in the wrong mindset of a part of the attendees. They usually see this experience merely as a trip rather than an educational opportunity.

Luckily, it didn’t happen in our case, giving extraordinary value to the project.

What have we learned, you may ask?

I believe that it’s way too complicated to describe and I am afraid that I could hardly illustrate in detail everything we have done during this week. However, we can list some main points that may spring concrete and nontrivial thoughts.

Social inclusion was, indeed, the main theme of the activities. The project focused on respect for other and cultural diversity, without any political, religious, sexual or ethnic differences. What struck our Italian group the most though, was the teaching method. “No-Formal Education”, an approach that we never experienced in our archaic nation and far from the Community development.

First of all, they taught us the concept and the importance of time. Everything was organized in
the name of precision and time management. From 9 am to 7 pm, excluding breaks, we worked on attitude towards the acceptance of diversity and respect for others. This meant to give us the right idea of cultural integration, which unfortunately is usually based second-hand knowledge rather than direct experience.

We attended several workshops, where we have been in touch with different cultures, have expressed our creativity and have talked about the need of a change of pace when facing everyday difficulties.
We should point out that Erasmus Plus is a European Union funded project, in which everyone can participate, with no economic barriers whatsoever. 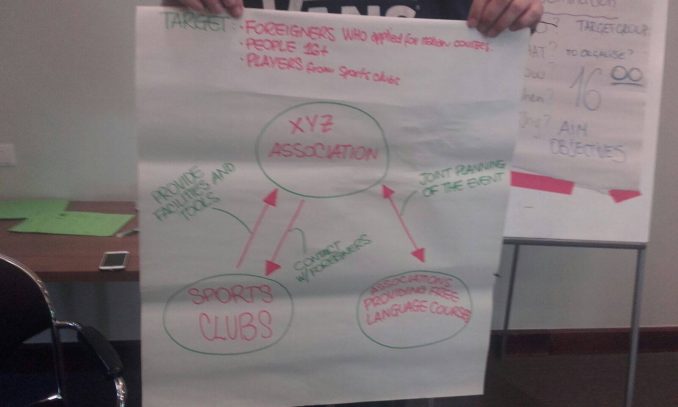 In Italy, however, a project like Erasmus Plus is seen like a “weekly truancy”, that translates
into isolation and marginalization from those who should educate the youth and help the development of future generations. Two examples should help to understand our experience of forty-three boys and girls who are still crying because, after having become like a family, they have to go back to their cruel and hypocrite everyday life.

During one project activity, facilitators divided the group (not by nationality) and initiated a discussion about refugees. We have been asked to propose any possible solutions to the migration problem. From that, a majestic debate began: for the first time in my life I saw peers thinking without prejudice and being respectful of others’ opinions.

Everyone gave proof of a probably unknown maturity in Italy (just think about the constitutional reform debate and the hatred between Yes and No
supporters) and in the European Union, guilty of being at the mercy of closed minded people that usually discriminate diversity.

I smiled and cried

For a brief moment I brushed among forests, lakes and feelings the idea of the Europe I wanted and am
looking for, the one that I wanted, that I’m looking for right now. Unfortunately, I had to leave this “Europe” but I surely won’t forget the extraordinary people I met and the project that sprung, as I am certain I will find it again. There isn’t just one idea, of course: about refugees, for example, there were several points of view. But in Lithuania I learned that the world doesn’t and won’t work on stereotypes, marginalization, social exclusion linked to occidental prejudices.

This second example was far more devastating: a social experiment, with two groups divided in actors and audience. The actors enacted a potentially controversial ritual, where men tried to force women to bow in front of them. We thought for the worst, but we were wrong. Men tried to reach the superiority of the women. They taught what we need to live in harmony: mankind victory over time, respect of diversity, take the problems as a source of solution based on a culture which has roots in various contexts. They taught us to love, to look beyond.

This experiment reminded me of the essay of my Legal Sociology teacher Letizia Mancini, entitled “Burqa, Niqab and women rights”. In the essay she talks about the European approach to the Islamic culture and the problems derived from that, which is still an issue. The solutions that come from teacher Mancini and from this project are quite similar: “Mufuliat Fijiabi, a Nigerian journalist activiely involved in the defense of women, is right when she says that burqa is first of all an item of clothing, and should not be banned or limited.

Who should decide which kind of clothes is acceptable or not ffor women? Which standard should regulate these decisions? Emancipation of Muslim women may come from the veil, or its refuse, according to Fadwa El Guindi. The veil may have personal or religious meaning. It could stand for tradition or emancipation. We should clear any paternalistic and misleading thoughts from gender dignity and equality.

What we should hope from European institutions is a new mindset that will grant and protect the rights of women who wear burqa. They should have the right to participate and to be listened. They should have economic and social rights, because without them freedom, independence, dignity and integration are merely thoughts that we can discuss forever but don’t really matter”.
My hope is, from words like these, for a change of pace to look forward beyond distances and differences, ut also beyond the stupidity of a prevailing idea only because it has been originated from the “evolved” societies. These thoughts create onlydisasters.

The only power is in the diversity and in its acceptance.